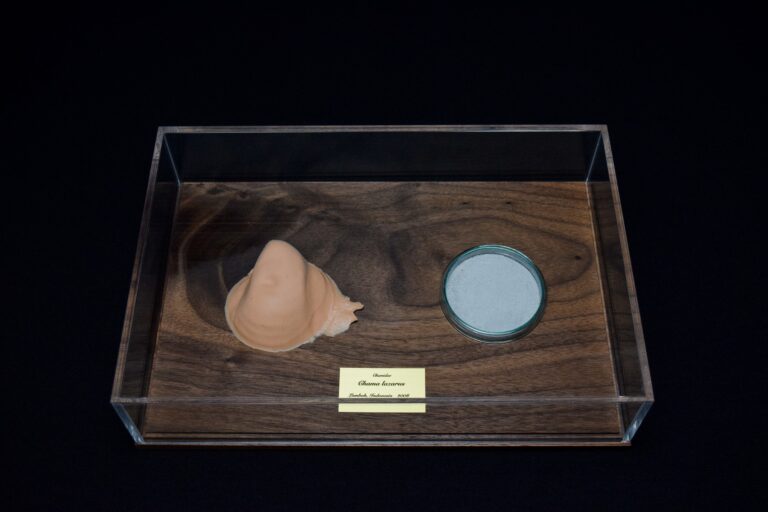 A Life Without Form

A Life Without Form is an exploratory research into the origins of seashells, their economic & cultural value and the long-standing tradition of collecting. A remark on the behaviour of the past while simultaneously questioning our modern relationship, authenticity and perspective when dealing with (natural) objects of desire.

Seashells have been part of countless cultures and their use arguably predates the timeframe of what is commonly considered to be part of modern human history. Ranging from functional items such as currency and jewelry to being worshipped as symbols of wealth, fertility and strength. Their most prolific appearance in Europe came during the 16th century as a result of the colonial trade, exploration and exploitation by the Dutch East India Company (VOC). Seashells as an exotic good became widely admired for their natural beauty, mathematical properties and as a reference towards god as well as gaining scientific noteworthiness through the study of nature. Instigating a craze amongst the upper class of society, conchylomania caused a rapid adoption of seashells into private collections. Over time our affection for the aesthetics and beauty of seashells is still very much alive, yet their social value as a symbol of extreme wealth has partly shifted towards the realm of trinkets and tourism, also a common good used as a building material.

A Life Without Form consists of a series of 36 display cases in various sizes, containing a casting from the inside of a shell on one side. The unique shape of the inner chamber is directly linked to the former inhabitant and represents the living force that once resided inside. Across from this the corresponding seashell is presented, grounded down into powder. The act of turning these beautifully shaped and patterned objects into powder is intended as a reference to the natural processes of decay and transformation and a direct response to the ambiguity that comes with the traditional methods of preservation & collecting of seashells, which disregards or even results in the killing of the animal itself. As such it is also a reminder of the unseen living animal behind the shell, the creator and its essence.

The work is intended as a critical gesture on the concept of collecting and preserving itself. To embrace life in its alive state, rather than worshipping certain shapes & forms in which it manifests, as well as accepting the flow of energy and as such the transformation and change of reality & each being as well as our own bodies decay.